Does Obama Care About Black People?

Besides taking the microphone away from Taylor Swift, Kanye West's other infamous moment was when he declared that "George Bush doesn't care about black people." What prompted West's outburst was the aftermath of hurricane Katrina. Bush and West have since made peace; but, if frustration over the federal response to the flooding of New Orleans led West to conclude that Bush was a racist, what must he think of Barack Obama given his record when it comes to helping African Americans.

In the past, bleak statistics about the state of the black community have been used by some to suggest that the occupant of the White House did not care. This was especially true if the occupant happened to be Republican. However, when one looks at the data with respect to black unemployment, home ownership and poverty, Bush outperforms Obama.

As part of his "Ownership Society",  Bush undertook several measures to close the gap between the home ownership rates of non-minorities and minorities. Said measures included helping first-time buyers with down payments, closing costs and expanding federally insured mortgages with no money down. These efforts resulted in black home ownership hitting an all time high of 50%. In contrast, the latest figures from the Census Bureau show that the home ownership rate among African Americans has dropped to 44.2% under the Obama administration. 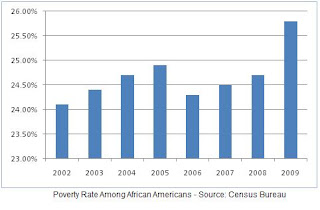 African Americans have also not fared well under Obama in terms of the poverty rate. As the chart on the right side shows, the poverty rate was lower during the Bush years. In 2009 - the most recent figures available - the poverty among blacks reached 25.8%.

Obama's record as far as improving the well being of the black community is so dismal, that recently members of the Congressional Black Caucus have spoken out. Representative Maxime Waters said: "We're getting tired. And so, what we want to do is, we want to give the president every opportunity to show what he can do and what he's prepared to lead on. We want to give him every opportunity, but our people are hurting. The unemployment is unconscionable." So we know what the Congressional Black Caucus thinks. Now all we need is to know what Kanye West thinks.