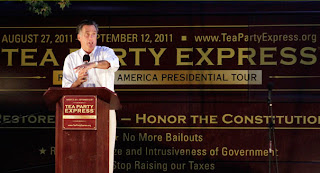 After six national polls showing Rick Perry as the new frontrunner for the GOP nomination, a Romney makeover was bound to happen. The Madonna of modern American politics over the weekend unveiled his latest incarnation: Tea Party.

In the last week, Romney has started to make overtures to the Tea Party. He reversed himself and decided to attend Jim "Tea Party" DeMint's Forum on Labor Day. He spoke at a rally of the Tea Party Express. His supporters are quick to point Romney delivered the same speech to the Tea Party he has been delivering to audiences since entering the 2012 race for the White House. But if Perry continues to surge in the polls, it will not be long before Romney begins to don a tricorn hat. Count on it.

Perhaps Romney's best chance of getting the GOP nomination is already behind him. When he entered the race in 2008, he was seen a successful governor of a very blue state. An entrepreneur with extensive business experience. He was the turnaround artist that saved the 2002 Salt Lake City Olympics. Competence was his defining trait.


Unfortunately for Romney, his campaign made a strategic decision to focus on Iowa. Had Romney focused on winning New Hampshire, John McCain would have been out of the race. Romney, in all likelihood, would have picked up most McCain supporters and won the nomination against Huckabee, who was regional candidate; the uninspiring Fred Thompson; and Giuliani, who had too much personal baggage.
Romney could have possibly even beaten Obama. McCain was ahead of Obama until the financial meltdown. Unfortunately for the GOP, neither McCain nor Palin were able to address the frozen credit markets in a coherent and competent manner.

In contrast, the financial crisis was tailor made for Romney to shine. With his understanding of the private economy and capital markets, Romney would have been able to assure the American people that he, and not Obama, was better equipped to deal with the crisis.

Thus far this year Romney has been running the race that he should have run in 2008. He is focused on touting his business experience. He is ignoring Iowa. But, he is still suffering from the damage he did to himself trying to beat Huckabee three years ago.

To win Iowa, Romney transformed himself from a businessman into a culture warrior. In the process, he reversed himself on several positions and earned the reputation of flip flopper. Many in the GOP do not trust him.

Until Perry entered the race, Romney's strategy seemed to be working. He focused his attacks on Obama. He did not sign pledges that could be problematic in the general election. But his frontrunner status was always predicated on a weak Republican field. He doesn't have a constituency in the GOP like a Bachmann or Perry. And Romney's main problem continues to be that he is seen a chameleon with no core values. And his latest incarnation will only reinforce that image.