Let's Negotiate Instead Of Demonizing 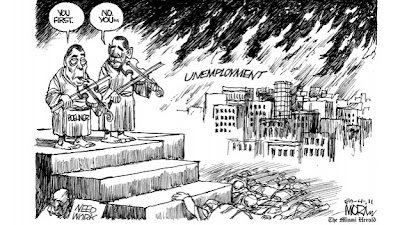 "I want them to work together". I hear that statement more and more lately among traders, brokers and individuals who have worked in "Wall Street" for decades. While partisans may feel invigorated by the standoffs in Washington,  polls show that most Americans were not happy about the debt debate and basically placed a pox on both political parties.

I don't want readers to think that the individuals I am referring to are Democrats or left leaning. Quite the contrary. Most are life long Republicans and are great believers in the free enterprise system. But the recent antics in DC has them all concerned about the inability of elected officials to come together and address the difficult problems facing our country.

Speaking before The Heritage Foundation, Newt Gingrich recently said that the forming of the Super Committee was indicative of a "total breakdown of the legislative  process". He proposed that Congress focus on bills with bipartisan support for the first three days of each week just to get people in the habit of focusing on common ground. Change the psychology from "No, because..." to "Yes, if...".

And Gingrich is right. The psychology in DC is to focus on the differences instead of focusing on the areas of agreement. The top priority seem to be to demonize each other instead of negotiating in good faith. Proposals are either ignored - as Obama did to its own debt commission - or they are used as blunt instruments in political ads.

Paul Ryan offered a plan to address our fiscal problems. Democrats responded by running ads featuring a Ryan look alike pushing grandma's wheelchair over the edge. Recently, Huntsman proposed his economic plan which was quickly labeled as "tax cuts for the rich". And Republicans respond in kind to Democrat proposals. It seems that DC has forgotten the function of proposals. They are a starting point for negotiations. No one expects the final agreement to be a replica of the original proposal.

Imagine if the rest of the country would adopt the same approach. An employer makes a job offer only to be called an "exploiter of the working people". A prospective home buyer makes an offer and the seller reject it referring to the buyer as greedy not wanting to pay his "fair share". The country would stop to function and be paralyzed just like DC.