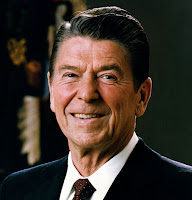 There is no political figure who is more loved in conservative circles than Ronald Reagan. His speeches still inspire conservatives today as they did when he first delivered them. During Republican presidential primaries every candidate tries to portray himself or herself as the "next" Reagan. "What would Reagan do?" is constantly being asked on talk radio. But if Ronald Reagan were to run in 2012, would he still be considered a conservative champion or would he be called a RINO?

There are three policy areas that could very well earn Reagan the RINO label: immigration, taxation and social issues.

Republicans are aware that in 1986 Reagan signed into law a sweeping immigration reform bill that included amnesty for millions of illegal immigrants. However, many are not aware that Reagan openly supported amnesty while seeking re-election in 1984. During a presidential debate with Walter Mondale, Reagan said "I believe in the idea of amnesty for those who have put down roots and lived here, even though sometime back they may have entered illegally,". Would such a stance, attitude towards illegal immigrants be acceptable to today's Republican primary voters?

Reaganomics is associated with aggressive tax cutting. Many conservatives believe that Reagan never raised taxes. The reality is that in 1982 Reagan enacted two major tax increases. The Tax Equity and Fiscal Responsibility Act (TEFRA) and the Highway Revenue Act. In 1983, Reagan raised Social Security taxes. In 1984, Reagan raised taxes again when he signed into law the Deficit Reduction Act. Could a Republican candidate with such a record on taxes be acceptable to today's conservative base?

Reagan's pro-life stance has earned him love and admiration among social conservatives. However, when one looks at social issues other than abortion, Reagan would probably not gain the support of groups like Focus on the Family. In 1978, Reagan opposed the Briggs ballot initiative which would have banned gay and lesbian teachers in California. In an editorial published in the Los Angeles Herald-Examiner, Reagan wrote "Whatever else it is, homosexuality is not a contagious disease like the measles. Prevailing scientific opinion is that an individual's sexuality is determined at a very early age and that a child's teachers do not really influence this." Reagan decided to issue such an editorial even though he was planning to run for president in 1980. Biographer Lou Cannon wrote that Reagan was " well aware that there were those who wanted him to duck the issue but nevertheless chose to state his convictions."