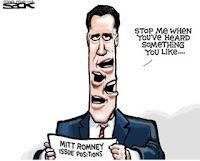 Mitt Romney has been campaigning for president for the last six years. And it shows. Not only does it show in his outstanding debate performances. It also shows on the Internet where the Romney campaign has established a strong presence.
Of course, there is the official website (a campaign must). But several other websites have popped up including AmericaNeedsMitt (no self-esteem problem here!); EvangelicalsForMitt.org (gotta take care of the "religion" problem); and, WhyRomney.com.
A click on the WhyRomney link will take you to a page titled "Setting The Record Straight" dedicated to fighting "false claims" a.k.a. Mitt's flip flops. And the list of "false claims" is quite extensive:

Unfortunately for Romney, the effect of such a long list is to drive home the fact that he has changed positions on so many issues. It shows his weakness as a candidate. If the Bush was able to successfully portray John Kerry as a flip flopper using one famous "I was for it before I voted against it" statement, what will Obama be able to do to Romney with so much material?
Posted by CC at 6:43 AM