What Do They Say? A Picture Is Worth A Thousand Words.....

As the prospect of Mitt Romney being the nominee seems to increase, the desperation among conservatives rises with each passing day. Today, Chris Christie endorsed Romney. The look on Christie's face in the photo below perfectly captures the enthusiasm that conservatives feel towards Romney as a nominee: 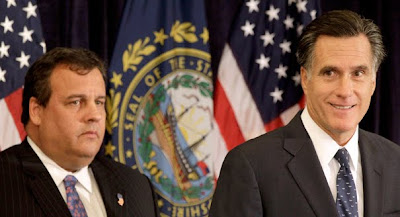 The GOP has been down this road before. Just four years ago, the party nominated John McCain. How did that turn out? Not well.

McCain picked Sarah Palin as VP to energize the base. And then proceeded to reverse his positions on issues like the Bush Tax Cuts all in a effort to win the base. The byproduct of this backwards strategy was to turn off the very people McCain was supposed to attract: the independent voters. Will the same happen with Romney?
Posted by CC at 9:37 PM