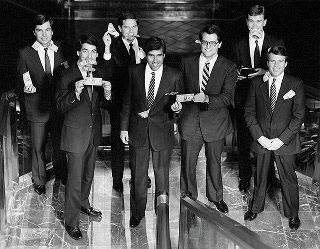 It seemed odd that out of nowhere Occupy Wall Street showed up outside New York Stock Exchange.

Unlike the Tea Party that sprung up shortly after the much hated TARP and the Stimulus bill, OWS was not immediately preceded by any controversial event.

The Wall Street bailouts happened three years ago. No Santelli-like rant calling for people taking to the streets to fight income equality. And yet Zuccotti Park filled up with tents.

And why not Occupy DC? Wall Street does not set tax rates. Wall Street could not receive bailouts without the consent of the politicians. Given the stated grievances by OWS, it would have made more sense if they set up their camps across from the US Capitol.

Democrats immediately embraced OWS. No surprise here. Rich vs. Poor has been a long standing theme in the Democrat political playbook. But what OWS provided was new language for an old tactic. 1% vs. 99% has now become part of the American political dictionary.

The encampments are gone. But 1% remains in the lexicon. And the GOP seems ready to nominate a candidate that fits the definition of the 1% perfectly. Not only in terms of wealth. But more importantly in terms of being a Wall Street millionaire. OWS could not have framed the upcoming election better for the Democrats if it tried....

.... Hmmm.... may be there was event that caused OWS to appear. Mitt Romney being the front runner for the GOP nomination.
Posted by CC at 7:50 AM