In Politics You Do Not Turn The Other Cheek 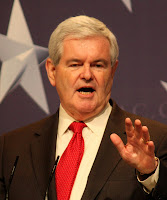 The Iowa results are in and there is no doubt that negative campaigning works. It is also clear that voters say things they do not mean.

Whenever asked, voters are quick to decry negative ads. They claim to want to hear about solutions. Newt Gingrich took the voters at their word and paid a heavy price.

It seems that every election cycle some politicians fall into the trap of "taking the high road". Jon Huntsman certainly did. When he announced he was running for the Republican nomination he promised a positive campaign. That immediately won him accolades from the press and then he was quickly forgotten.

Huntsman put serious proposals on the table regarding tax reform; updating American foreign policy; ending the too big too fail banks. How much coverage did he get? Very little. He tweets “To be clear. I believe in evolution and trust scientists on global warming. Call me crazy,” and gets days of coverage.

Eventually every candidate has to draw a contrast with his or her opponents. The idea that all Republicans should just focus their fire on Barack Obama sounds great in theory. But in reality it doesn't help the GOP candidates differentiate themselves from one another.

As soon as a candidate promising a positive campaign points out a negative aspect of his opponent's record, he will be immediately called out for betraying his pledge. His opponents will jump on him for flip flopping. For being untrustworthy. There is no winning with this strategy.

Perhaps voters tell pollsters that they want positive campaigns because they believe that's the informed, intelligent thing to say. In any case, going forward politicians should just realize that voters are not being truthful and plan accordingly. It is fine to pledge to focus on issues and solutions. But a candidate must always reserve the right to defend himself when attacked.
Posted by CC at 10:07 PM