No Heart ... And Frankly No Brain 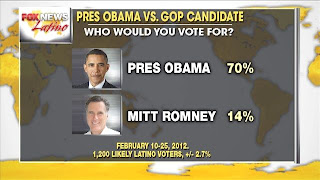 Recently a few articles have been published noting that Mitt Romney enjoys little support among Latino voters. A Fox News Poll  found that against Barack Obama, only 14% of Latinos would vote for Romney. Or approximately half of the support that John McCain enjoyed in 2008 which was 31%. And well below the 44% George W. Bush received in 2004. But these numbers should not surprise anyone. At least not anyone who has closely followed the Romney campaign this year.
Immigration was not much of an issue until Rick Perry entered the GOP race and shot up to top of the polls. "Inevitable" Mitt had to do something quick. He first accused Perry of wanting to destroy Social Security. But attacking from the Left is not the smartest strategy for someone who is desperately trying to shed his moderate image. And then Romney hit pay dirt with the issue of Texas' version of the Dream Act.

Romney effectively used the in-state tuition for undocumented students to beat back the Perry challenge. To his credit, Perry did not back down and tried as best he could explain why the policy was sensible and consistent with GOP principles. Perry was visibly frustrated that this issue was trumping his ten year record as a successful governor. Trumping his impressive job creation record at a time when the economy was supposedly the number one issue.

Finally, during a debate Perry said that anyone who wanted to deny an opportunity to go to college to students who were brought here illegally as children had "no heart". Conservative pundits immediately seized on Perry's "no heart" remark and took umbrage. Perry was accused of sounding like a liberal. GASP! "This is not about being heartless... it is about upholding the rule of law", thundered talk radio. This went on for weeks bringing to mind Shakespeare's line "the lady doth protest too much."

But Romney is not alone in mishandling the issue of illegal immigration. Obama's aggressive deportation program and failure to deliver immigration reform provided the GOP a fantastic opportunity to gain support among Latino voters. You know, the fastest growing demographic group in the United States. But the GOP stuck with its old rhetoric and FAIR inspired approach.

And the Dream Act is such a no brainer. It involves no amnesty since the undocumented students have violated no law. They were minors when they were brought into this country by their parents. They find themselves in a legal limbo not of their own making. What exactly do the opponents of the Dream Act expect these children to do? Stop at the border and refuse to follow their parents? "No mommy and daddy. I  am not going with you because that would violate U.S. immigration laws". Ridiculous!