What If Chief Justice Roberts Is Right... 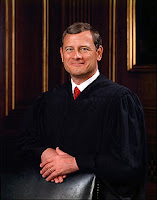 The consensus seems to be that U.S. Solicitor General Donald Verrilli had another bad day before the Supreme Court. This time was over the constitutionality of Arizona SB1070. Or at least parts of the law.

Supporters of the Arizona law have focused on this quote by Chief Justice Roberts: "It seems to me that the federal government just doesn't want to know who is here illegally or not" as if it was some sort of revelation. Here is  the dirty little secret... illegal immigration brings in money into the federal coffers while enforcement is a cost.

Now I have no evidence that clearly proves that the federal government is purposefully looking the other way when it comes to illegal immigration. But I can certainly see why it would be tempted.

Let's say Chief Justice Roberts is absolutely correct. The federal government made a conscious decision to be lax in its enforcement of immigration law; does this mean that states have a constitutional right to take up the slack? I am not aware of any section of the Constitution granting said right to the states.

The Constitution is quite specific as to the powers that belong to the federal government. Immigration is one of them pursuant to Article 1, section 8. And discretion as to enforcement is part of the power to regulate immigration.

If the Supreme Court does find that states have the right to step in and aid the federal government, perhaps states can pass laws helping the IRS collect unpaid taxes. In 2010, it was estimated that $330 billion in taxes were not collected. After all this is about the rule of law. The possibilities are limitless. Unless the rule of law only matters when it comes to  illegal immigration.