Obamacare Ruling: No Victory For Conservatives 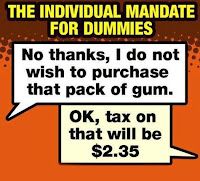 It will take a while for me to recover from the disappointment I feel regarding the Supreme Court decision on the so called "Obamacare" law. Had Italy not won its semi-final match in the European Championship, I would be suicidal. (Kidding!).


And what will make the recovery period even longer, is watching conservatives trying to spin the ruling as a positive for those who believe in a limited federal government.

In its ruling, the Court said:


"... the mandate is not a legal command to buy insurance. Rather, it makes going without insurance just another thing the Government taxes, like buying gasoline or earning income. And if the mandate is in effect just a tax hike on certain taxpayers who do not have health insurance, it may be within Congress’s constitutional power to tax."


But, but, but... the Commerce Clause has been narrowed.... that's the REAL conservative victory. UGH!

First, the Commerce Clause was NOT narrowed. It was NOT expanded. Therefore, the horrible precedent set by Wickard v. Filburn is still with us. What we have is status quo. That's it. And anyone who says otherwise is being either dishonest or delusional.


Second, who needs the Commerce Clause expanded when the taxing power can be used to tax both activity and non-activity? Now if it is "fairly possible" to view a mandate as a tax, then it will be deemed a constitutional tax pursuant to the Taxing and Spending Clause. "Fairly possible" is a very low standard for the federal government to meet.

I suppose one could say conservatives "won" as far as the ruling on the Medicaid portion of the bill. The federal government cannot withhold all Medicaid funding to states who do not want to participate in the new program. However, even this is a hollow "victory".


True, a state can decide not to expand Medicaid as prescribed by Obamacare. However, the residents in the states that opt out of the new program will still be sending tax payments into the federal treasury and help fund the states that choose to participate.

Sorry. I just do not see how the cause of a limited federal government has been advanced by this decision.

And watching the conservative intelligentsia say otherwise is even more disheartening than the ruling. After all, these are the people who are supposed to provide the intellectual firepower needed to reign in government. As far as I am concerned they are either unwilling or unable to effectively counter the tactics used by the Left to expand and centralize power in DC. Depressing.