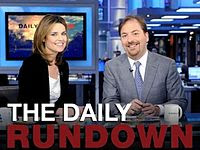 Chuck Todd has a commercial running on MSNBC where he is driving a car talking about his responsibility to use his "unique" access to politicians for the "greater good". He says that his job is to hold elected officials accountable; to bring up issues Americans care about.. lofty sentiments indeed.

And Todd is spot on regarding the responsibility of the media. As Thomas Jefferson said,


“The press is the best instrument for enlightening the mind of man, and improving him as a rational, moral and social being”

Unfortunately, Todd's high minded declarations often do not translate into action. I regularly watch his Daily Rundown Show and mostly it is a gaggle of frustrated campaign strategist wannabes dishing out their unsolicited advice to the candidates. They talk about the process, make predictions... focus on the latest polling.. in other words most of the time is dedicated to issues that the American people care LEAST about.

Todd is not alone as far as focusing on Johnson as an election spoiler. It seems that the press is operating under the assumption that the White House exclusively belongs to Republican and Democrat candidates.

The reality is that the White House does not belong to Republicans and Democrats. It belongs to the people. The votes do not belong to Romney or Obama... they belong to the voters. It is up to Obama, Romney and Johnson to earn the votes.

If the media wants to serve the people as it claims, it must also stop creating self-fulfilling prophecies by declaring - months ahead of election day- which candidate can or cannot win. This is the equivalent of  waking up in the morning and saying to yourself you cannot get up from bed. Proceed to stay in bed and at the end of the day congratulating yourself for being right about not being able to get up.

As long as a candidate is on the ballot, he or she can win. So can Gary Johnson win? Yes, he can. Is he likely to win? Not as long as people focus on process and other distractions instead of focusing on who is the best candidate to do the job for the next four years. And not as long as voters forget that it is the people's White House... not Romney's or Obama's White House.