Race, Gender And The Empty Chair 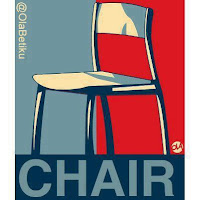 I have been thinking about writing this piece for quite sometime. Discussing anything related to discrimination, race is always very difficult. It can quickly degenerate into name calling and unfounded charges of racism.

Despite electing the first African American to the highest office in the land - if not the world - the issue of race still remains just below the surface and retains its explosive quality.

And frankly, I do not see this changing anytime soon especially in light of the fact that both parties gain electoral advantages by using race.

But what happened at the Republican convention cured my reluctance. I am talking about Clint Eastwood empty chair routine.

Initially, I was just stunned. Why would anyone in the Romney camp think that such a stunt would attract the all imporant independent voters? But that routine was not for independent voters. It was for the voters - in and outside that hall - that see Obama has an illegitimate president.

And I am not just referring to the nonsense that Obama is not legally eligible to be president because he is not a natural born citizen. But the belief that Obama was able to reach the White House because of the eagerness of white voters to prove to the world they are not racists by voting for a black man.

Never mind that Obama is not the first African American to run for president. Shirley Chisholm, Carol Moseley Braun, Al Sharpton and Jesse Jackson tried and failed. I suppose that white voters just didn't feel guilty enough at the time to put them in the White House.

Never mind that Obama had to defeat the savvy and well funded Clinton political machine. A feat that many political experts - including Dick Morris the darling of Fox News - never thought possible.

On the other hand, Romney struggled for months to  defeat heavily underfunded opponents. Weak candidates like Michelle Bachman who confused a famous actor with a serial killer. Cain who never held elected office. Rick "Oops" Perry. And the human grenade Newt Gingrich.

The constant request to see his transcripts is just another way of implying that Obama is one more undeserving black man that benefited from affirmative action. For many - especially white working class men - affirmative action is synonym with advancement of unqualified women and minorities.

Of course, the irony is that for most of American history it was unqualified white men that were promoted. Countless more capable women and minorities we shut out of the job market. For centuries talented individuals were overlooked. Never given the chance to fulfil their potential just because of their race or gender.

To this day white men still benefit from the culture of exclusion that dominated this country for so much of its history. When Obama announced his candidacy for president there was a real question whether a black man could win the White House. There has never been any question that a white man can be elected president.

The same is true in the business world. There is never any doubt that white men can be effective leaders. While women and minorities always have to overcome doubts about their abilities just because of their race and gender. I have experienced this myself as a woman seeing my white male colleagues have instant credibility while I had to prove myself credible.

For the last few days social media has been filled with images of empty chairs. Some of the images included empty suits. But who is really is the empty suit? The son raised by a middle class single mother who had to overcome the racial history of this country or the son of a CEO and governor who benefited from the racial history of this country?
Posted by CC at 12:08 PM