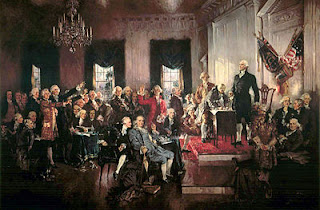 Despite popular memes on Facebook stating that the framers created a new government to prevent another tyrant, the reality is that the Shays' rebellion was more influential in shaping the Constitution than King George. Despite what right wing political entertainers would have you believe, the Constitution was not designed to set up a government were states' rights reigned supreme or where individual rights always triumphed over the public good. Quite the contrary. The impetus behind the Constitution was the desire to create a nation that could defend its borders and interests abroad, pay its debts and ensure domestic tranquility. Or, in the words of George Washington, to create a "respectable nation."

Prior to the Constitution, a great experiment in states' rights and weak central government called the Articles of Confederation took place. The very form of government that many "liberty" folks advocate. It resulted in anarchy at home and impotence abroad.

At home, states ignored the Articles of Confederation to the detriment of national policy. New York negotiated a separate treaty with Iroquois even though the Articles gave the exclusive right to negotiate treaties to the Congress.  South Carolina and New York were not complying with the treaty that ended the Revolutionary War. Popular unrests throughout the states raised fears that the American experiment in self-government was headed for failure. Washington wrote:


"I am really mortified beyond expression that in the moment of Acknowledged Independence we should, by our conduct, verify the predictions of our transatlantic foes, & render ourselves ridiculous & contemptible in the eyes of all Europe."


It was against this background that the Constitution was born. The original mandate directed the delegates to the federal Convention to propose changes to the Articles of Confederation.  A mandate that the delegates quickly ignored and, instead, designed a new government. Apparently, the framers were not strict textualists.

The Bill of Rights was not included in the original proposal approved by the delegates on September 17, 1787. The federalists argued that it was  unnecessary since the new government drew its power from the people and not from a hereditary ruler. There was also a concern that any right not listed in the Constitution would be endangered simply because it was not mentioned. The Bill of Rights came about as part of addressing concerns raised during the ratification process.

Once adopted, the first ten amendments did not become a true bill of rights until the 14th Amendment was passed. Prior to Reconstructions, Americans looked to the Declaration of Independence to assert their rights. When Madison and Jefferson challenged the Alien and Sedition Acts, they turned to state legislatures and not the courts using the Bill of Rights. So when someone asks "What did the framers intend to achieve with the Bill of Rights?" The answer is: to get votes for ratification.

Not only was the Bill of Rights not part of the original proposal, it is clear from the language in the Constitution that individual rights can be overridden in certain circumstances. Habeas Corpus can be suspended in "Cases of Rebellion or Invasion the public Safety may require it." Congress has the power to call the militia to "... suppress Insurrections and repel Invasions". Again, the main preoccupation of the framers was to establish order at home and defend the nation. It was not to create some libertarian paradise where individual rights were absolute.

The idea that our rights are unalienable (i.e. cannot be taken or given away) is simply not true. An individual can lose his or her liberty, property and even life provided due process is followed. The application of the Bill of Rights has always been an exercise of balancing individual rights vs. the state's interest in promoting the public good. The issue has always been where the optimum balance lies. Unfettered individual rights  never existed and were never the main objective of the Constitution.

At opening of the federal convention, Edmund Randolph of Virginia began the proceeding by saying "Our chief danger arises from the democratic parts of our [states] constitutions. None of the constitutions have provided sufficient checks against democracy." The Constitution was the instrument created to place checks against democracy. What the framers understood is that the blessing of liberty and economic prosperity cannot be enjoyed in a failed state.
Posted by CC at 8:37 AM