A Country Of Virgin Births 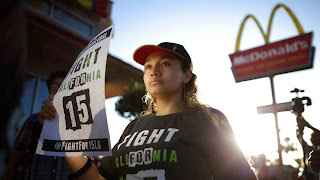 For the last few days, I have seen the headline "I’ve worked at McDonald’s for 10 years and still make $7.35 an hour" floating around social media. Today, I finally decided to click on it and read the story's contents. It was about making the case for a higher minimum wage. No surprise here.

What caught my attention was the final paragraph:


"I've worked at McDonald's for 10 years and still make $7.35 an hour - only pennies above the federal minimum wage. My four girls deserve better. I deserve better. McDonald's and other fast-food companies are going to learn that when you aren't paid enough to survive, you're willing to do whatever it takes, for as long as it takes, until you are treated fairly."


If what the author says is correct - and I have no reason to doubt her - while her wages remained the same, the number of children she had increased. Why have more children if you are already struggling supporting the ones you have? Or maybe McDonald's, just like Hobby Lobby, frowns upon using birth control? Yes, I know. I am a mean, heartless beotch for even bringing this subject up. At this point, I really don't care what people think. Actually, I never did.

But, the number of children the author had is not what prompted my rant. Here is what did it:

Last week, Paul Ryan made a speech about wanting to solve the problem of poverty in America. Yes, the man that spent the 2012 presidential campaign diving Americans between "takers vs. makers" is now running around saying "Ayn Rand who?" Amazing what two years of bad polls can do.

Anyway, in his speech Ryan talks about helping a single mother of two get out of poverty. Once again the question "WHERE THE HELL IS THE FATHER?" popped in mind. I remember Republicans ridiculing the "Life of Julia" ad by the Obama campaign because at 31 she a had child and no father or husband was around. Now Republicans are joining the Democrats in helping women with children that, I suppose, were the result of virgin births.

Don't get me wrong. I am not a social conservative that is horrified at the idea of single women having sex. Quite the opposite. I am an old time-1970s-ERA-supporting feminist. But I cannot help think that we feminists - as a way to address paternalism in our culture - might have overcompensated and created this notion that women can do it all. That men are accessories that we may choose to keep around here and there. A movement about opening up opportunities to women seems to have been morphed into a license to relieve men of their responsibility as fathers. This is not what I signed up for.

It is clear that many women can't do it all. That is why both parties are constantly devising new programs to help single mothers. Even if women have the means to do it all, why should they? If a man is not ready to shoulder the responsibility of raising a child, he needs to make a trip to the drug store. And no whining about "it doesn't feel as good."

Raising the minimum wage may be a good idea. Ryan's poverty program may have merit. I am just saying that there is only one recorded virgin birth in history: Jesus Christ.
Posted by CC at 3:01 PM