How The GOP Can Win Me Back 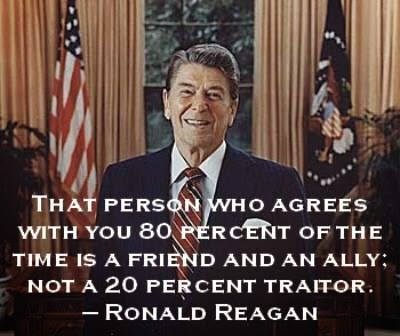 Election Day must be getting closer. How do we know? Calls for Republicans to unite are more frequent and louder. After spending months tearing each other apart; the Tea Party determined to purge the RINOs; the GOP establishment vowing to crush the Tea Party; all of must be forgotten; set aside in order to defeat the Democrats.

With each call for unity, old, worn out to the point of disintegration clichés are trotted out as if they were a revelation. The Buckley Rule of voting for the most conservative candidate that can win is regurgitated. And of course, Ronald Reagan is once again enlisted by repeating his famous quote “The person who agrees with you 80 percent of the time is a friend and an ally – not a 20-percent traitor.” Groan.


It is all very tedious and pointless. The problem with today’s GOP is that there is only 20% agreement and 80% disagreement. There are only two things Republicans agree on. First, they dislike president Obama and the Democrats. Second, they want to repeal Obamacare.

Today’s Republican Party is made up of disparate groups often at the opposite end of the political spectrum. The GOP coalition consists of the Chamber of Commerce and populists; religious conservatives and social libertarians; defense hawks and non-interventionists. That’s not a political coalition. It is an insane asylum.


Trying to unite such a motley crew is a Herculean task. It requires leaders with exceptional, if not unprecedented, skills. Unfortunately, the GOP is saddled with a leadership that is as old, worn out and tedious as the aforementioned clichés. John Boehner and Mitch McConnell are uninspiring and not trusted by the party’s grassroots. They have no vision and have been completely ineffective as political opponents of the president. At every turn, they are outwitted by the Democrats.

Then there are the Republican political consultants. People like Karl Rove who spent millions in 2012 and had nothing to show for it except his epic meltdown on election night. The same strategists that haven’t had an original idea since the 1980s are re-engaged instead of making room for new talent, new ideas. It is no wonder that the GOP has not been able to benefit from Obama’s lower approval ratings.

In the short term, Republican will not make any changes. They are confident that the 2014 mid-terms are going to be base elections. Scream Benghazi and run ads against Obamacare; that, they believe, will be enough to win control of the Senate. They are probably correct in their assessment. The Democrats are defending several seats in red states where Obama’s popularity is very low. However, looking beyond this year and at cultural, demographic trends, the party’s future is very bleak.
As a former Republican and someone who is still interested in having an alternative to the Democrats, here is how the party can again win my support:


First, the party desperately needs new leadership and a new set of political strategists. The lesser of the two evils argument simply has no resonance with me; and, please stop trying to put the old Reagan three legged stool together. Let Reagan rest in peace and assemble a new political coalition.
Second, stop pretending to be a religious denomination. Americans cherish their religious beliefs; but they also understand that salvation is a private matter between the individual and his or her God; not a government function. The GOP has become so closely identified with one strain of Christianity that is pushing away voters that belong to other religions. Hindus, Buddhists, Jewish and secular voters who are receptive to the message of fiscal responsibility, entrepreneurship, strong defense are repelled by the overly evangelical Christian rhetoric employed by Republican officials.


Third, come clean and admit once and for all that trying to ban abortion is failed strategy that will not reduce the number of abortions. The only effective way to lower the number of abortions is promoting and expanding access to birth control. Abandon the quixotic pursuit of trying to grant personhood rights to fertilized eggs. Voters have rejected every state ballot initiative to grant personhood at conception. Even deep red Mississippi rejected personhood at conception despite the Republican gubernatorial candidate warning voters that defeating Amendment 26 would mean “Satan wins.”
Fourth, same sex marriage will be legal in all 50 states in the near future. Time to face reality. Anyone who refuses to support the Republican Party because he or she can’t accept that  LGBT individuals have equal protection under the law will not help the party grow. In other words, it is time for an amicable divorce from the Faith and Freedom crowd.


Fifth, fiscal responsibility means paying your bills. Forget the so called “starve the beast” approach. It has been an utter and complete failure. A beast that has a money printing press cannot be starved. If the American people want all the programs, services, benefits that the government provides, then they need to pay more in taxes. As long as Americans can enjoy more and more programs and not pay one penny extra for it, there is no incentive to reduce the size and scope of government.
Sixth, it is also time to part ways with the Chamber of Commerce. The GOP should become the champion of small businesses not multinationals. It should be the defender of Main Street, not Wall Street. My alienation from the Republican Party began with TARP. After years of lecturing poor people about personal responsibility, the GOP immediately came to the aid of Wall Street millionaires who overleveraged their firms; no lectures about pulling oneself by the boot straps for those who can afford Ferraris. Above all, stop trying to pass off what amounts to socializing losses while privatizing profits as standing up for free markets.


Finally, the GOP should continue to be the party that promotes American leadership in the world. At the same time it needs to recognize that before we can project strength abroad we need to restore confidence at home.

Seven suggestions that would win me back and, I believe, begin the process of building a new political coalition. Is the GOP listening?
Posted by CC at 3:36 PM