We Just Had A Seinfeld Election

Republicans worst fears were confirmed Thursday night. Barack Obama is still president and will be president for the next two years. Republicans are also leaning the bitter lesson that there is no such thing as lame duck as long as the president has veto power. What was supposed to be a time of electoral triumph for John Boehner and Mitch McConnell has quickly turned into the first test of whether the GOP can govern.

It wasn’t supposed be this way. On Election night, McConnell extended a hand of cooperation to Obama. The next day, McConnell made it clear that government shutdowns and playing with the debt ceiling were off the table. Boehner also reached out to Obama in the name of the American people wanting both parties to work together. All was for naught as Obama dismissed the election results and, figuratively, kicked sand in their faces.

Email ThisBlogThis!Share to TwitterShare to FacebookShare to Pinterest
Labels: 2014 Elections

More Than Just A Pair Of Pink Shoes 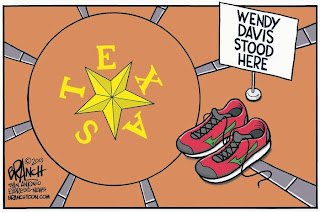 The articles keep on coming. One after another pointing out what went wrong with the Wendy Davis campaign. Chock-full of advice about how she could have won.

Let's be clear. To have a remote chance at winning, Wendy would have had to dress up in camo, pick up an AR-15 and head to the Texas-Mexico border. Only after apprehending a couple of unauthorized immigrants trying to sneak into the United States could Wendy make the case that she is not a flaming liberal bent on turning Texas into the dreaded California. In other words, Wendy Davis never had a chance.