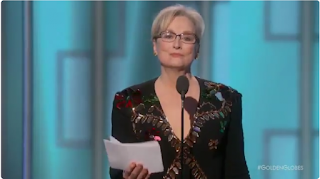 Still despondent over Hillary Clinton's loss, Hollywood served its latest round of Trump bashing during the Golden Globe Awards ceremony. I didn’t watch the broadcast for two reasons: 1) I haven’t seen any of the performances, shows or films nominated; and 2) To spare myself the predictable Hollywood tirade over the election results – they are beyond tedious. But when social media was filled with praise for Meryl Streep for putting Trump in his place, I decided to take a look at her speech, thinking that someone had come up with something other than the usual attacks – I mean, they claim to be masters of the “creative arts,” right? – only to be disappointed. The same claptrap that failed to swing the election in Hillary’s favor was offered again by Ms. Streep – she drew no new blood.